Publications of the group 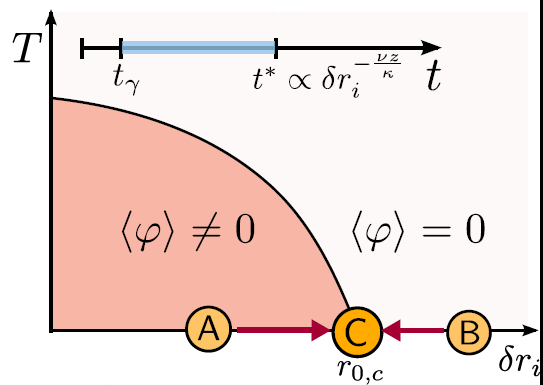 We consider an open system near a quantum critical point that is suddenly moved towards the critical point. The bath-dominated diffusive non-equilibrium dynamics after the quench is shown to follow scaling behavior, governed by a critical exponent that emerges in addition to the known equilibrium critical exponents. We determine this exponent and show that it describes universal prethermalized coarsening dynamics of the order parameter in an intermediate time regime. Implications of this quantum critical prethermalization are a powerlaw rise of order and correlations after an initial collapse of the equilibrium state and a crossover to thermalization that occurs arbitrarily late for sufficiently shallow quenches.

Non-equilibrium dynamics of a dissipative spin

We study the non-equilibrium dynamics of quantum spins that are coupled to a dissipative environment. We are interested in the situation of strong spin-bath coupling and study, for example, the universal dynamics if the spin is driven through an avoided level crossing, the renowned Landau-Zener problem. We also investigate setups with multiple spins and study the entanglement between the spins and between spins and bath.

To approach this problem, we have developed a novel non-perturbative stochastic method based on the real-time functional integral description. It yields numerically exact results for an Ohmic bath in the scaling limit of large bath frequencies. 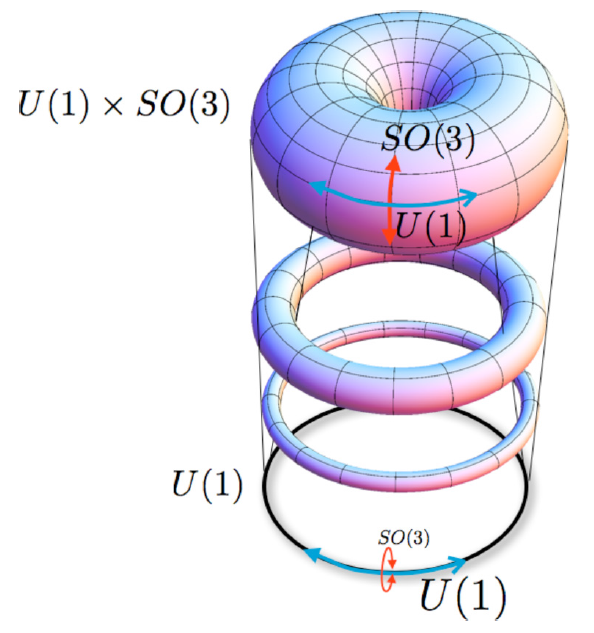 We study a two-dimensional frustrated Heisenberg antiferromagnet on the windmill lattice consisting of triangular and dual honeycomb lattice sites. In the classical ground state, the spins on different sublattices are decoupled, but quantum and thermal fluctuations drive the system into a coplanar state via an “order from disorder” mechanism. We obtain the finite temperature phase diagram using renormalization group approaches. In the coplanar regime, the relative U(1) phase between the spins on the two sublattices decouples from the remaining degrees of freedom, and is described by a six-state clock model with an emergent critical phase. At lower temperatures, the system enters a Z6 broken phase with long-range phase correlations. We derive these results by two distinct renormalization group approaches to two-dimensional magnetism:Wilson-Polyakov scaling and Friedan’s geometric approach to nonlinear sigma models where the scaling of the spin stiffnesses is governed by the Ricci flow of a 4D metric tensor. 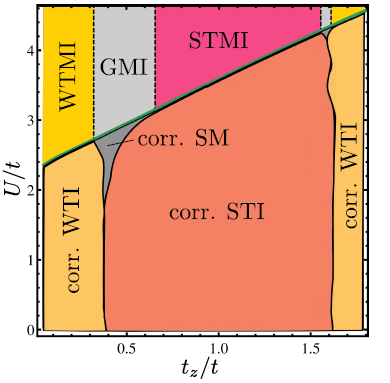 Experiments of interacting cold-atomic gases in optical lattices can address outstanding open questions of condensed matter physics. One important example is the understanding and manipulation of interacting topological phases of matter. These are many-body quantum states that can only exist if both a topological band structure and strong correlations are present.

We consider interactions in the paradigmatic (time-reversal-invariant) Hofstadter-Hubbard model and a three-dimensional generalization of it. We obtain the interacting phase diagram using real-space DMFT and a (cluster) slave-rotor method. In the 3D setup we predict that by increasing the interaction strength, which is experimentally tunable, the system is driven into exotic topological Mott insulating phases.

We investigate the photon statistics, entanglement and squeezing of a pn-junction sandwiched between two superconducting leads, and show that such an electrically-driven photon pump generates correlated and entangled pairs of photons. In particular, we demonstrate that the squeezing of the fluctuations in the quadrature amplitudes of the emitted light can be manipulated by changing the relative phase of the order parameters of the superconductors. This reveals how macroscopic coherence of the superconducting state can be used to tailor the properties of a two-photon state. We also study the luminescence and the lasing transition at stronger coupling.